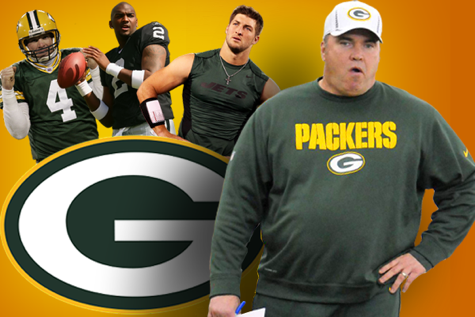 The answer is no.

I beg your pardon?

NO, I’M NOT COMING BACK TO QB THE PACKERS.

I saw my backup, what’s-his-name, get hurt the other night. I know you need someone to take over the offense.

Brett, at this time, we’re not planning to sign anyone. The starting QB spot will be manned by Seneca…

DON’T BEG ME, MIKE. I SAID I’M NOT PLAYING AGAIN, AND THAT’S FINAL.

I HAVE A VERY FULL, HAPPY RETIREMENT DOWN HERE IN LOUSIANA, AND YOU’RE NOT GOING TO GET ME TO FLY UP THERE TOMORROW MORNING ON ANY OF THE THREE AVAILABLE NOSTOP FLIGHTS THAT WOULD GET ME THERE IN PLENTY OF TIME FOR THE AFTERNOON PRACTICE.

Listen Brett, even if we were interested in signing a QB, which we’re not, the rift between you and the Packers still hasn’t healed enough to…

And don’t play coy with me by asking if I’m still in game shape, since you and I both know I’m as fit and sharp as I’ve ever been. THE ANSWER REMAINS NO.

ALL RIGHT, ALL RIGHT, IF YOU’RE GOING TO TWIST MY ARM, FINE.

I’ll prove to you that I’m still very much in shape for this job which I’m absolutely not going to take unless you ask me quickly.

No, I don’t mind. Whatever it takes to get you to stop begging me.

I assume you want me text you a photo to show you the rock hard condition I’m in?

Coach McCarthy? It’s Matt Flynn? I was the backup there a couple of years ago?

Yes of course Matt. How are you?

UNEMPLOYED, is how I am. I understand you have a QB position available.

MATT FLYNN IS READY TO TAKE THE REINS. Just draw up the contract, and I’ll be there tomorrow to sign it.

Now bear in mind that I have a precedent of signing big money contracts. So don’t insult me by offering me one of those “veteran minimum” ripoff deals.

We won’t insult you by offering you that, I promise.

So we’re agreed then. I’ll be there tomorrow with bells on, You have a contract with lots of “,000s” on it for me to sign.

Matt, you’re not listening. We have our QB already. We’re not looking to sign anyone.

I don’t think you’ve considered the positive impact I could have on your team.

How do you mean?

Last year I signed a huge money contract with Seattle. Seriously, they paid me a TRUCKLOAD of cash.

I read about that, yes.

I read about that too.

My mere presence on the roster turned 3rd round rookie Russell Something-Or-Other into a playoff-caliber starter.

AND THEN THIS YEAR, I went to Oakland, where I was still collecting those huge paychecks. But you know what happened next?

I’LL TELL YOU WHAT HAPPENED. SOME GUY NAMED PURELLE FRYER BECAME THEIR STARTER.

AND PURELY BY MY PRESENCE ON THE ROSTER, HE’S BECOME ONE OF THE MORE PROMISING YOUNG QBs IN THE LEAGUE

Again Matt, I don’t think it was your presence that…

I TURNED THOSE SCATTERARMED CLOWNS INTO STARS. AND I CAN DO THE SAME THING FOR YOU GUYS.

Matt I appreciate the interest, but… wait, I’m not sure I follow. What do you mean, “do the same thing for us?”

Put me on your team. My mere presence will turn Aaron Rodgers into a star.

You don’t watch a lot of football do you?

I don’t care for the sport. Much too violent. I avoid watching it whenever possible. Or playing it, for that matter.

Isn’t it obvious? I was on your roster from ’08-’11. I MADE AARON RODGERS INTO THE PLAYER HE IS TODAY.

You may be overestimating your impact.

I think it’s only fair you compensate me, retroactively, for supplying your QB with my special Flynn mojo.

Adjusted for inflation, I figure you owe me three seasons worth of whatever that Rodgers guy makes.

Sweet. I’d like my $66 mill in 1’s and 5’s please. The strip club near my house doesn’t like making change.

JaMarcus, not to be rude, but it’s been a long day, and I know why you’re texting me. We’re not interested.

PLEASE DON”T SAY NO. I need this gig bad, and I think I could really help you guys.

We have everyone we need at the position already, thanks.

I CAN WIPE THE FLOOR WITH THOSE OTHER GUYS. My dumpoffs are faster than ever. I think I could really clean up for you.

PLUS I CAN SHINE UNDER PRESSURE! DUST OFF ALL THE COBWEBS! REALLY KICK THE TRASH TO THE CURB!

You have an odd way of describing your QB skills.

Quarterback skills? I’m applying for the nighttime janitor position you guys listed in the classifieds.

You mean you need a quarterback too?

NO WE DON’T. Seneca Wallace is going to handle that job.

I’ve never heard of Seneca Wallace. Who is he?

No offense, but he’s better than you.

That doesn’t narrow it down very much.

JaMarcus, thanks for your text, but I need to run.

WAIT. What about that janitor job? 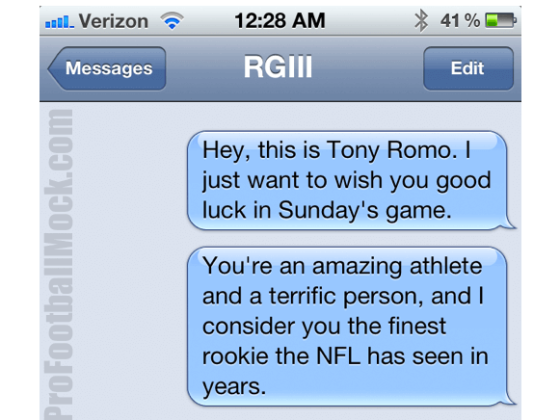 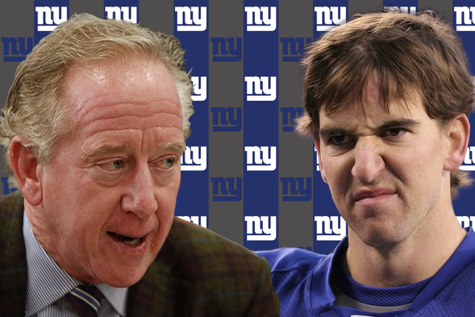