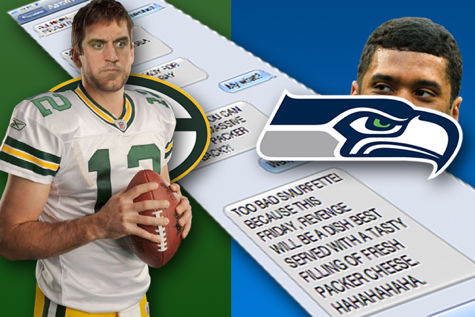 ALL RIGHT, LISTEN UP YOU LITTLE SHIT!

I beg your pardon?

MY PACKERS ARE PLAYING YOUR PATHETIC LITTLE SEA MONKEYS THIS WEEKEND.

ARE YOU READY FOR YOUR GREEN BAY BEATDOWN?!

YOU THINK YOU CAN HANDLE A MASSIVE BLITZ OF PACKER PAYBACK?!

TOO BAD SMURFETTE! BECAUSE THIS FRIDAY, REVENGE WILL BE A DISH BEST SERVED WITH A TASTY FILLING OF FRESH PACKER CHEESE. HAHAHAHAHA.

Um… okay. Why do you want revenge?

DON’T PRETEND LIKE YOU DON’T KNOW WHAT’S GOING ON HERE.

LAST YEAR YOU AND YOUR WRETCHED BAND OF SEAQUEEFS STOLE THAT MONDAY NIGHT GAME FROM ME THANKS TO THAT TOTALLY BULLSHIT “FAIL MARY” TOUCHDOWN.

And why would you be telling all this to a Presbyterian priest?

This seems like an odd declaration for you to make to a Presbyterian priest from Heated Bonerville, WA.

Russell Wilson is the quarterback for the Seattle Seahawks. I got your number from the Washington State phone directory

Young man, has it ever occurred to you that there is more than one “Russell Wilson” living in the state of Washington?

Father, I am SO, SO, SO SORRY for unleashing my rage on you like that.

I forgive you. Though I’m still confused.

Well, in a nutshell, I hate the other Russell Wilson. I hate him SO, SO MUCH.

And after what happened last year in Seattle, I’m really looking forward to beating him this weekend on OUR home field.

In a town you called “Green Bay?”

What a strange name for a city.

With all due respect Father, no one who lives in a town called “Heated Bonerville” has the right to criticize anyone’s city.

Anyways, I just want to get my revenge by whipping his entire miserable team while the whole world watches.

Are you someone famous?

THIS IS THE MIGHTY AARON RODGERS. I AM A WORLD-RENOWNED QUARTERBACK FOR THE GREEN BAY PACKERS

And so, you’re angry because this Seattle quarterback fellow is better than you?

HE IS NOT BETTER THAN ME.

Then why are you so upset?

I’m upset because a year ago, his team was unjustly given a victory over mine thanks to an officiating error.

And you’re still holding a grudge, a full year later?

YES! DO YOU HAVE ANY IDEA WHAT THAT GAME COST ME?

Your tenuous grip on reality?

WORSE. IT COST ME A SUPER BOWL TITLE!

If my team had won that Seattle game, we would have had home field advantage in the playoffs against Colin Eat-A-Dick and his 49ers. No WAY would we have lost that game if it had been at Lambeau.

After that we would have easily beaten Matt Ryan and the Falcons because they always choke in the playoffs.

Then in the Super Bowl we would have crushed Joe Flacco and the Ravens on account of they have Joe Flacco.

THAT SHRIMPY BASTARD OWES ME A SUPER BOWL RING.

Are you sure that’s what really bothering you?

YES. WHAT ELSE WOULD IT BE?

What, are you saying? That maybe my intense hatred of Russell Wilson actually stems from some deep-seated insecurities of my own?

You think it’s possible that I’m subconsciously jealous of him because he’s only in his 2nd season, and is playing for a team that could dominate the NFC for the next decade, while I’m an 8th year veteran with 4, maybe 5 good years left playing for a team with no defense or running game?

So what you’re saying then is that deep down, I don’t actually hate Russell Wilson, so much as I secretly envy him and maybe, just maybe, what I truly wish is that I could be more like him?

I think you’ve just made a breakthrough.

My God, I feel like a fifty-pound weight’s been lifted off my chest. Admitting all that was… it was like an enema of my soul.

Father, thank you SO MUCH for hearing my confession and helping me come to grips with my true feelings

It was my pleasure to hear your confession.

Wait a minute. I just realized something.

THE PRESBYTERIAN FAITH DOESN’T HAVE PRIESTS!

Who said they did?

Actually, all I said was, “Why would you be telling all this to a Presbyterian Priest?”

YOU TOLD ME YOU WERE A CLERGYMAN LIVING IN HEATED BONERVILLE, WASHINGTON

Technically, I only implied it.

AND NOW THAT I THINK ABOUT IT…

THAT’S AN ANAGRAM FOR “I HAVE BEEN TROLLED”

And yes you have.

SO HELP ME, I WILL STRANGLE THE LAST BREATH OF LIFE FROM YOUR THROAT WITH A STRING OF GREEN AND YELLOW ROSARY BEADS, WILSON! 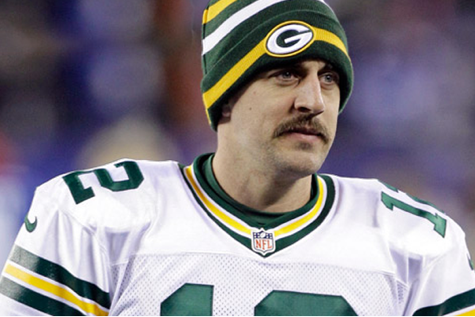