DETROIT – After a late night of bar-hopping and heavy drinking in Detroit’s downtown club district, a visibly annoyed Jay Cutler called a time out early in the first quarter of today’s Bears-Lions Thanksgiving day game, at which point he addressed the jeering crowd to demand that the raucous fans, “keep your stupid voices down before my head splits open, for fuck’s sake.”

“Jesus Christ, shut the hell up you goddamn shrieking yokels,” said Cutler into a microphone broadcasting over the stadium’s public address system. “For your information, I was out until nearly four in the morning hitting up the shitholes that pass for bars in this armpit of a town. I’ve had maybe two hours of sleep and I’m hung over like a motherfucker, so the last thing I want to hear right now is all of you fat cows mooing at the top of your lungs. Now pipe down and let me quarterback in peace!”

Cutler’s demands for quiet seemed to have the opposite effect he desired, as the crowd only grew more rambunctious after his address. 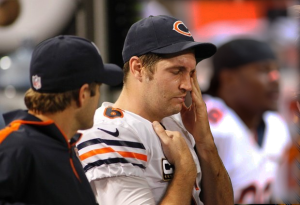 “For the love of… how dumb are the idiots who live in this hellhole,” moaned Cutler in the sideline, holding his head. “Do they not understand plain English? I told them I have a headache, and to quit their yapping. How much clearer can I be? It’s almost like they’re doing it to provoke me. Stupid fuckwads.”

A second effort to silence the crowd proved no more successful than the first.

“All right, let’s try this one more time, dumb asses,” Cutler snarled at midfield. “Since you’re obviously too dense to grasp this basic concept, let me spell it out for you: the more you keep making racket, the harder it is for our offense to hear my signals, which means we’re not gonna be able to gain yards and score points. You understand that, nitwits? You paid all this cash to see an exciting game, and you’re just fucking it up with all your frigging noise. So if you want to get your money’s worth, then all of you need to shut your ugly faces, and sit the hell down. Oh, and one of you go run and fetch me a couple of Advil and a cold compress. C’mon, chop-chop, dummies.”