A demand for a contract extension between the Dallas Cowboys and QB Tony Romo was issued on behalf of the New York Giants, Philadelphia Eagles, and Washington Redskins, it was reported early Monday. 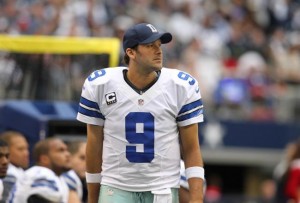 “Tony Romo has been an integral component of the Cowboys’ fortunes the past several years, and it’s time to ensure his future as the quarterback of America’s Team,” read a joint statement issued by the three NFC East rivals. “We hereby call on Jerry Jones to sign Tony to a lucrative new deal that will guarantee he remains a Cowboy for the remainder of what we all hope will be a long, long career.”

Romo, entering the final season of a six-year, $67.5 million contract, has been the team’s starting QB since 2006, and talks on a new contract have been proceeding slowly, to the frustration of the Cowboys’ divisional foes.

“I understand these sorts of deals can be tricky, because of salary cap space and whatnot,” said Philadelphia Eagles owner Jeffrey Lurie. “Trust me, if the commissioner will allow it, we at the Eagles would be more than happy to shift some of our cap room to the Cowboys to get the deal done. Five million, ten million whatever it takes. Let’s make this happen.”

“I talked to the guys, and we all agreed to chip in some cash,” said Giants CB Corey Webster. “Between me, Jason Pierre-Paul, and Mathias Kiwanuka, alone, we have nearly five million bucks we’ll donate. We don’t ever want to see #9 wearing anything but the Silver and Blue, y’know?”

“Tony Romo is synonymous with the Dallas Cowboys, and perfectly encompasses everything they represent,” added Redskins LB Ryan Kerrigan. “I know I speak on behalf of everyone in the greater New York, Philadelphia, and Washington DC areas when I say, ‘Get this done Dallas. Make Tony Romo a Cowboy for life.’”