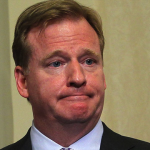 Jesus Christ. This is unbelievable.

Okay, look. Maybe this is partly my fault. I suppose we should have nipped this thing in the bud by, I don’t know, giving players an annual “Please Don’t Commit Murder” speech, I guess?

It’s worked in the past, right? Shitheads like Vince Young and Terrell Owens signed enormous contracts with insane amounts of guaranteed money, yet somehow managed to go bankrupt within just a few short years. So now we have to give players annual speeches reminding them not to piss away the millions upon millions of dollars we give them on booze and bling. Like they’re fucking ten year olds.

Okay fine. From now on, I guess we’ll have to give a speech every year to the rookies encouraging them not to slaughter any of their fellow human beings. We’ll call it something like, “Committing First Degree Murder: Why It May Not Be The Best Choice For You.” Or maybe, “If Your Friends Want You To Kill Some Guy, Then They Aren’t Your Real Friends.” Or even, “Murder: It’s Just Not ‘Cool’ Anymore.”

So who can we get to give this apparently necessary speech? I suppose we’ll need to put together a list of famous players who haven’t killed anyone. Like Larry Fitzgerald. He’s never whacked anyone, right? Drew Brees is murder-free too, if my memory serves. Then there’s RGIII, Adrian Peterson, Darrelle Revis, Michael Vick. No wait, Vick had that dog thing. Better leave him off. Ray Lewis too. He was exonerated of his murder charges, but still, you know? No, what we need is some nice clean, pure living guy like Ray Rice to convince incoming players that murder is, you know, bad.

Ooh, better yet: I’ll fine them! Why didn’t I think of this before? New policy: Any player caught killing someone will face a $10,000 dollar fine. No, make it $20,000. Let’s show them that we really mean business. Second offenses get a four game suspension. Ha. THAT’LL get their attention, the little shits.

And next year, we can plan a whole new line of speeches. You know, just some helpful seminars with names like, “How To Wipe Your Ass 101,“ ”Pouring Bleach Directly Into Your Ear Is Probably Not The Wisest Thing To Do,” and “Just Say ‘No’ To Taking A Bath With Your Toaster.”

Sometimes I hate this fucking job.