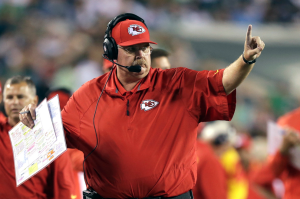 PHILADELPHIA – Frustrated by their team’s 17-3 loss to the Dallas Cowboys in Sunday’s NFC East showdown, as well as an offense that’s come crashing back to Earth after a high-flying start to the season, fed-up Eagle fans are demanding that team owner Jeffrey Lurie fire head coach Chip Kelly and immediately begins searching for an “Andy Reid” type to assume the reins, it was reported early Monday.

“How long do we have to put up with this sloppy play and these mediocre performances?” asked longtime Philly fan Joey Giordano, 35. “We need someone like that Andy Reid down in Kansas City. He’s got his team playing smart, efficient football, and that’s paying off in the win column.”

“Plus, he seems like he’s really good at clock management, which is something we haven’t had around here in what seems like forever,” added Giordano. 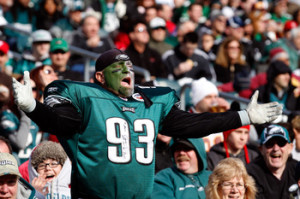 Reid, currently in his first season as Chiefs coach, has his team off to a 7-0 start, the only remaining unbeaten mark in the NFL. By comparison Kelly, also in his rookie season as a head coach, has a 3-4 record and has seen his team hit hard by injuries and inconsistent play.

“We desperately need an Andy Reid type to take over the Eagles,” said Robert Winiecki, 40. “He’s committed to running the football, he emphasizes the fundamentals, and most importantly, he fosters a winning atmosphere. It’s time for Eagles to fire Chip Kelly and get us fans an Andy Reid-ish sort of coach that we can stand behind and give our full and unwavering support to for the next decade or so!”