DALLAS – Pro bowl DE DeMarcus Ware, released by the Cowboys in a surprising cap-clearing maneuver at the start of the NFL’s free agency period, told reporters he’s looking forward to continuing his Hall of Fame career in a new city, and greatly looks forward to “one day very soon sacking the living hell out of Tony Romo.” 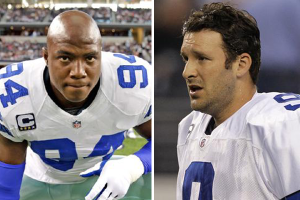 “Understand, I’m not just talking about a gentle, ‘in-the-grasp’ type sack. Hell no, I really want to take his lights out,” Ware told reporters as he carried his duffel bag out of Cowboys headquarters for the last time. “I’m just imagining myself in a Saints uniform, or maybe the Seahawks or Giants, lining up against Dallas in a big game, like on a late season Sunday night contest or something. And on a key third down snap with just a couple of minutes left in the game, I’d put a swim move on (Dallas OT Tyron Smith), burst through the line, and WHAM, I clobber him right in the chest. Just completely annihilate him, and send him flying back ten, twelve yards maybe.”

A slightly salivating Ware then added, “Oh man, look at me. I’m sporting a little wood here just thinking about it.”

Ware explained that his Romo-sacking interest began several years ago.

“I’d say sacking Tony Romo has been a dream of mine since around January of 2007,” Ware said. “That was the year of that bobbled snap in Seattle, remember? It was my first playoff game, and I was pretty excited that we were about to win and advance to the next round. Until… you know, that snap. I’d say, yeah, that’s when those fantasies began to form pretty strongly in my head.”

Asked for more examples of situations that grew his interest in Romo sacking, Ware added, “Well, there was that time he shit the bed against the Vikings in the playoffs, that other time he threw the game-losing pick to the Jets, that meltdown he had last year against Denver, that other meltdown he had last year against Green Bay, that other meltdown… you know guys, I’d love to sit here and list all the times I’ve thought about sacking Tony Romo, but my wife’s gonna have dinner ready in about five hours.”

When questioned by reporters if money would be a primary factor in his quest for a new contract, Ware claimed, “No, my criteria for my next team really isn’t about how much cash they have to offer or where in the country they’re located. It basically comes down to how much RSO, or ‘Romo Sacking Opportunities,’ a team is capable of offering me. Right now, the Redskins, Eagles, and Giants certainly have the kind of RSO available to get me interested.”

Asked if he would enjoy playing against Romo and the Cowboys in a playoff game, Ware responded, “No, I haven’t really thought about that. I’m trying to keep this fantasy at least somewhat realistic.”