CLEVELAND – Just hours after moving into sole possession of first place in the AFC North for the first time in nineteen seasons, the revitalized 6-3 Cleveland Browns shocked the NFL today by announcing that they have been abruptly sold, and will once again be relocating to Baltimore, MD. 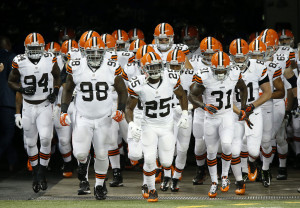 “The moving trucks will be here tomorrow morning,” said Browns GM Ray Farmer. “We’ve certainly enjoyed our time in Cleveland, and we wish the city all the best in its attempts to obtain a new NFL expansion team in the future. But beginning immediately, we will be known as the Baltimore Crows, and will be changing our color scheme to ebony and mauve. We look forward to wearing our new uniforms proudly as we march toward a Super Bowl or two in the very near future.”

When asked why the team chose Baltimore as its new location, being that the Ravens already play there, Farmer said, “Well our new owner, David Modell, has strong ties to the central Maryland area. Plus the good people of Baltimore haven’t had a Super Bowl championship to celebrate in almost 22 months now, so those long-suffering fans really deserve a winner to root for right now.”

The NFL moved swiftly to reassure Cleveland area sports fans that the loss of the Browns would not be permanent.

“The city of Cleveland will retain the ‘Browns’ nickname, as well as the orange/brown color scheme and all the team’s history and records,” said NFL commissioner Roger Goodell. “A new Browns team will begin play here in just three short years, and their lease with the city will stipulate that the team absolutely cannot relocate to Baltimore for at least two decades, or until the team moves into first place in the AFC North, whichever comes first.”