WASHINGTON – The elevation of journeyman QB Colt McCoy to the top of the Washington depth chart has come a surprise to many, most of all to his immediate family, who had no idea the former Texas Longhorn was even still active in the NFL, much less a member of the Redskins, according to sources close to the McCoy clan. 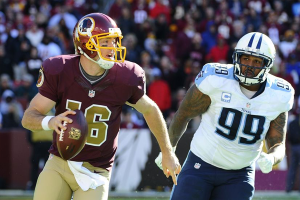 “Colt’s going to be starting this week? For who? Washington? Wait, when did he sign with Washington?” asked McCoy’s mother Debra when learning of the news. “Last I heard he was with, um, the 49ers right? Didn’t they sign him, like, three years ago or whatever? I just assumed he’d been cut and retired sometime since then.”

“I think you must have that wrong. Colt can’t possibly be starting in the NFL, can he?” father Brad McCoy asked of reporters. “Do you mean Colt Brennan? He played for Washington at some point, I think. No? It’s definitely my Colt? Huh. Who knew?”

McCoy, who replaced an ineffective Kirk Cousins for the Redskins in Sunday’s game against the Tennessee Titans and subsequently led the team to a 19-17 victory, was not surprised to learn of his family’s ignorance of his current situation.

“I talk to Mom and Pop when I can, and try to keep them up to date on my career,” McCoy said after Washington’s Tuesday’s practice. “But I get the impression that they’ve sort of lost interest since my college days. I’ll tell them about where I go in free agency, or who I sign with as a backup, and they always just kind of mutter, ‘that’s nice dear,’ and ‘well at least you’re keeping busy.’ I’m pretty sure they think I’m talking about playing Madden or something.”