Despite being mired in the worst season of his nine year career, Giants QB Eli Manning currently has the 5th highest selling jersey in the Manning household according to sales figures made available today from the official NFL merchandise store. 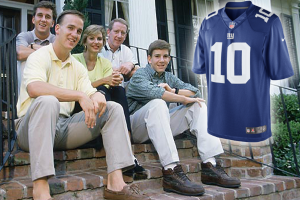 “I bought a $29.99 Eli jersey just the other day,” said Olivia Manning, matriarch of the Manning clan. “I decided to do some early Christmas shopping , and went online to buy a children’s size Drew Brees jersey for (grandson) Connor. I also bought a Robert Griffin III jersey for (Eli’s wife) Abby, because she just looks so good in burgundy. And I purchased a throwback Peyton Manning jersey for (Eli’s eldest daughter) Ava, since that’s her favorite player. And just before I checked out, I saw a listing for Eli Manning jerseys in their clearance section. So I figured what the heck? I bought one for (family dog) Pey-Pey.”

“Yeah for a goof, I bought both a Rivers and an Eli jersey last week,” said oldest Manning brother Cooper. “Then at our family dinner, right in front of everyone, I gave the Eli jersey to my dad, and he looked pretty disappointed. Then I asked if he wanted to trade it for a brand new Philip Rivers jersey, and he was all, ‘Hell yeah.’ Oh man, Eli’s face was priceless.” 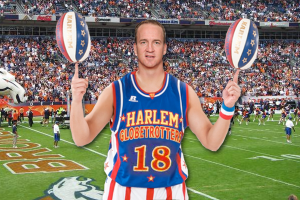