NEW JERSEY – A day after suffering a horrific 38-0 beating at the hands of the Carolina Panthers, Giants QB Eli Manning found himself taunted, harassed, and abused early this afternoon by a 4th grade bully wearing a Panthers jersey during Manning’s visit to Woodside Elementary School in Allendale, NJ, school sources have confirmed. 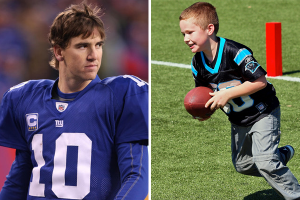 “I was there to give a speech about physical fitness and junk,” a visibly shaken Manning told reporters. “When this mean kid walked up to me and knocked the ball I was carrying out of my hands. When I told him to quit it, he just pushed me down and took the ball away again.”

The alleged bully, identified as ten-year old Tyler Brooks, reportedly continued to torment the Giants signal caller for the duration of his visit to the school.

“All through the day, him and some of his friends were playing keep-away with the ball from me,” continued Manning. “Every time I’d get my hands on it, they’d grab it away and wouldn’t give it back. Then they started chasing me around the halls, and tackling me to the ground. It really hurt!”

An attempt by Manning to enlist the aid of his Giants teammates as protection from the prepubescent hooligans proved fruitless.

“I called my starting offensive line to the school to provide a barrier between me and the mean kids. But it didn’t help. It seemed like no matter what we tried to do, the kids would just run around, or knock over my guys to hurt me again. Nothing we did seemed to slow them down. Stupid brats.”