MIAMI – OT Jonathan Martin, who stormed out of Dolphins headquarters on Monday after allegedly being teased and ridiculed by teammates, remained absent from the squad as of Friday afternoon, and the Miami front office has vowed to “thoroughly investigate and appropriately deal with any of our players who may have bullied this enormous pussy.” 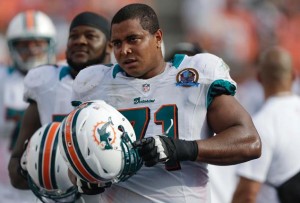 “We’re aware that Jonathan has been feeling picked on lately, and that those tauntings may have contributed to his running away from the team like a little bitch,” confirmed coach Joe Philbin. “We take allegations of bullying very seriously, and I personally intend to get to the bottom of whatever it is exactly that got Jonathan’s panties so ruffled.”

“Is the wittle baby gonna cry? Does he wanna run home to his Ma-ma?” added Philbin. “Well then, of course, we will support him while he does that.”

Martin, 24, has reportedly been the victim of season-long mocking by his teammates, which came to a head during a Monday lunch at the Dolphins training center in Davie, FL. The second year player abruptly left the team at that time, and has steadfastly refused to rejoin the squad, even missing Thursday night’s 22-20 victory over the Cincinnati Bengals in the process.

“Our policy is to create a safe and comfortable work environment for everyone, whether they be a tough, rugged individual like the other 52 members of our team, or a weak-kneed, wussy little gash like Jonathan,” said Philbin. “When he feels safe rejoining us, I’ll call a team meeting to bring him up to the front of the room where I will make it clear to the rest of our players that Jonathan is a sensitive, delicate little flower who under no circumstances should be teased, ridiculed, taunted, wet-willied, toilet-swirlied, towel-snapped, underwear-wedgied, or head-noogied during the half hour or so each day that the coaching staff will be monitoring their behavior. That should take care of the bullying problem around here.”