EAST RUTHERFORD, NJ – After Super Bowl XLVIII ended in a final score of 43-8 in favor of the Seattle Seahawks, Peyton Manning and the Denver Broncos have now officially been mathematically eliminated from the NFL playoffs, according to a scientific study released earlier today. 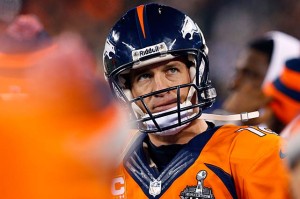 “My team and I have crunched the data of the Super Bowl results more than a dozen times,” said Dr. Hugo Bradenberg of the University of California-Berkeley’s Advanced Statistical Analysis Program. “Using the fundamental mathematical principles of ‘more than’ (>) and ‘less than’ (<), we’ve examined the final score several times, and run it through our computerized Playoff Advancement Simulation Program to thoroughly examine all possible scenarios. In every instance, the result has been the same. ’43′ is greater than ’8.’ Taking into consideration an error margin of plus or minus zero, I can state with confidence that the Broncos have been mathematically eliminated from any further post-season play.”

Broncos coach John Fox said he was disappointed in the study’s findings, but held out hope that Denver may yet move further in the playoffs.

“Look, those University eggheads can spout off with all the high-falutin’ book learning they want,” said Fox. “The bottom line is, football games aren’t decided on paper. No computer calculation’s gonna tell us that our season is over. We’re just gonna show up at the White House in a few weeks, knock on the door, and demand that President Obama come out and congratulate us as world champions. They can’t deny us that right.”

“And I don’t want anyone trying to keep us out us by quoting some stupid math formula that says ’43 is greater than 8,’ or whatever,” concluded Fox. “This is football, you Poindexters, not algebra class.”