FOXBOROUGH, MA – Patriots WR Danny Amendola, currently recovering from a groin injury that has kept him out of New England’s lineup the past two weeks, claims that he is not only “very close to returning,” but is already ahead of schedule in rehabbing the next three serious injuries he will suffer during the coming weeks. 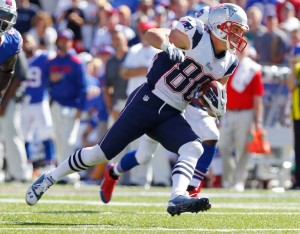 “I feel really good about where I stand right now with my injuries, both present and future,” said Amendola to reporters. “The groin’s getting close to 100%. And while I’ve been healing that up, I’ve also been using ice and various anti-inflammatories to treat the area where I’ll be suffering a hamstring strain in week 5. Plus I’m attending weekly physical therapy sessions to strengthen the shoulder I’ll be separating in week 7. The ACL tear I’ll experience in week 9 is going to be the trickiest one, but I’ve already got my leg brace on custom order and I’ve put Dr. James Andrews on a retainer through the end of December. So I’m as ready as I can possibly be.”

Added Amendola, “Damn, it feels good to be proactive.”

The oft-injured Amendola was signed by New England during the March free agency period as a replacement for the departed Wes Welker. And while he drew raves for his route running and chemistry with QB Tom Brady during the preseason, Amendola’s penchant for getting hurt has disrupted the offensive flow the team hoped to create.

“I can’t control what’s happened in the past,” Amendola concluded while applying IcyHot to the calf muscle he’ll be tearing sometime in late November. “All I can do is rehab my future injuries to the best of my abilities to get them back into the shape they were in before they got hurt, which technically is right now.”