According to sources close to the Washington Redskins, team owner Dan Snyder, anxiously awaiting MRI results on the knee of prized rookie QB Robert Griffin III, slipped the technician performing the procedure a ten dollar bill, and said, “There’s more where that came from if I get some good news later, capice?” 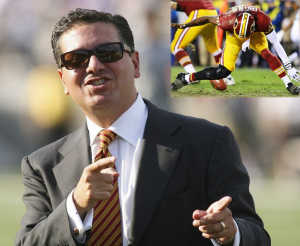 Griffin, the second overall pick in April’s draft and a front runner for NFL Rookie of the Year honors, sprained his knee during a December victory over the Baltimore Ravens, then exacerbated the injury during Sunday’s wild card loss to the Seattle Seahawks. Early speculation has claimed that Griffin may have suffered a tear of both his ACL and LCL. Snyder, however, believes that such a diagnosis can be avoided, “if you know whose palms to grease.”

“Look, I don’t want my guy to get just any old MRI,” Snyder reportedly said to Alex Morgan, the technician scheduled to perform the procedure. “You must have a special machine in the back somewhere that you reserve for VIP’s like me who really, really need to hear good news. So I assume we can come to some sort of arrangement here, right?”

Snyder then pulled a five dollar bill from his wallet, snapped the bill twice in his hands, slid the currency into the technician’s shirt pocket, and continued, “Let’s just say, my good friend Abraham Lincoln here would be very happy if a certain hospital employee makes Mr. Snyder smile later, you feel me?”