MINNEAPOLIS – The Minnesota Vikings announced today that they have triggered the long-awaited “part two” option of the infamous 1989 Herschel Walker trade, and as a result the Dallas Cowboys must now give the Vikings their first and second round picks in next May’s NFL draft, as well as a first and third round pick in the 2016 draft, sources close to the Vikings confirmed today. 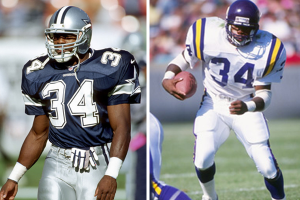 “We’ve informed the commissioner’s office that we are exercising the send half trigger on the Herschel Walker trade,” said Vikings G.M. Rick Spielman. “We’re very excited to have four high draft choices, including two first rounders, coming our way during the next two drafts with which to rebuild our team’s talent base.”

Reporters at the press conference expressed surprise that the quarter-century old trade had not yet been fully consummated already.

“Wait, you mean that for all these years, you guys have been thinking that we gave Dallas three first round picks, a bunch of second and third round picks, PLUS several starting caliber players, all to get just one guy?” said Spielman. “Jesus, you all must have thought we were morons.”

“No, what happened was, back in ’89 (former Vikings General Manager) Mike Lynn agreed to give all those picks and players to the Cowboys in exchange for Herschel Walker, but naturally he insisted that Dallas throw a provision into the deal for us to get ‘several high draft choices to be named later.’ Well it’s twenty-five years later, and we’re ready to name those picks.”

“Obviously, we’re disappointed to lose these draft selections to the Vikings, but a deal is a deal,” a disheartened Jerry Jones told reporters. “To tell you the truth, I’d completely forgotten that we’d added that ‘delayed gratification’ clause to the original trade. But it’s standard language for an NFL transaction. For example, back in 2008 I acquired Roy Williams from Detroit in exchange for a first, third and sixth round pick that year. But I also agreed to give them our first round picks for 2017, ’18, and ’19, so eventually we’ll have to… oh god,” moaned the Cowboys owner before burying his head in his hands and weeping softly.