NEW ORLEANS – Still basking in the glow of his team’s season opening victory against the divisional rival Falcons, Saints coach Sean Payton informed reporters today that he is strongly considering resting his team’s starting units on both offense and defense in order to keep them fresh for the playoffs, some sixteen weeks away. 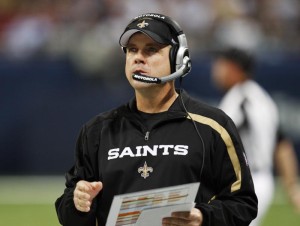 “I feel really good about where we are in the standings,” said Payton, whose 1-0 team currently sits atop the NFC South, ahead of the winless Falcons, Buccaneers, and Panthers. “Technically, we haven’t clinched the title yet. But realistically I feel we can pretty much coast to January at this point. Which is why I’d like to get my guys some much needed rest before the tournament begins. They’ve definitely earned it.”

Critics of the move have charged that Payton, whose team’s magic number to clinch the division currently stands at 15, is being too hasty in his decision.

“Well listen, there are a couple of different schools of thought on this practice,” countered Payton. “Some coaches, myself included, like to give players the chance to rest and heal up for the playoffs once you have a comfortable lead in the division, as we clearly do. Other coaches will say that there’s a risk of a team getting rusty during a layoff, particularly one that stretches on for, what, three and a half months or so”

“Am I concerned that Drew Brees’ timing might slip during the extended cruise around the world he’s planning on taking with his family? Or that Jimmy Graham might lose some of his edge during his tour of duty with the Peace Corps throughout Rwanda, Mozambique, and Botswana? Sure I am. But with the divisional title all but clinched for us here, it’s a calculated risk I’m willing to take.”