SEATTLE – Seahawks coach Pete Carroll, still reveling in the afterglow of his team’s 43-8 victory over Denver in Super Bowl XLVIII, told reporters that his team is “pretty well set,” at every roster spot, and declared his intentions not to draft any new players in the upcoming NFL draft, claiming the process would be “totally irrelevant,” according to local sources. 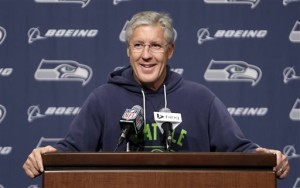 “Oh wow. The draft? Is that this week?” asked the smirking Carroll. “I totally forgot about that. No, I don’t think we’ll be picking anyone. Honestly, it’s a big headache. I’d have to fly to New York, sit in Radio City Music Hall for, like, three straight days, and all for what? Just to pick a bunch of college kids who cant play football as well as the guys we already have? No thanks, we’re good.”

When pressed by reporters, Carroll admitted, “Well, I guess we could use a new safety, or a cornerback maybe… Nah, I’m just messin’ with you. We finished as the top defense in the league last season. We just re-signed Earl Thomas and we’re about to lock up Richard Sherman to a new deal as well. What do we need new players there for? They’d probably just get in the way, asking dumb questions and slowing us down and whatnot.”

“And our offense? Well, our running game was outstanding. We have one of the league’s top young QBs. To be fair, we could use a game-breaking wide receiver. But to be even fairer, I should point out that we’ll have a healthy Percy Harvin this year, fully recovered from his hip surgery. So, yeah, we’re covered there too.”

When informed by reporters that NFL rules require the Seahawks to participate in the draft, Carroll reluctantly agreed to form some sort of selection strategy.

“Well, if we really have to pick someone, then maybe we’ll just draft, like, seven punters in a row. You know, for a goof. Or we could just trade all our picks for jelly doughnuts and bagels. Whatever. Don’t ask me. I’m gonna have some intern sitting at our draft table. Me, I’ll be hitting the links at Dyker Beach Golf Course over in Brooklyn for a 10am tee time.”