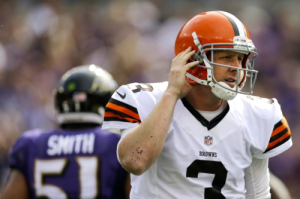 After Sunday’s 14-6 loss to the Baltimore Ravens dropped them to 0-2 on the season, the Cleveland Browns have somehow been mathematically eliminated from post-season play already, it was reported early today.

“You wouldn’t think it was possible,” said David Gabai, chair of Princeton University’s mathematics department. “But I’ve run these numbers four times now, factoring in their current won-loss record, those of their conference opponents, and other variables including strength of schedule, remaining division games, and what we call, ‘the Weeden curve,’ and I get the same result every time: playoff elimination.”

Just to be sure, Gabai, scribbling furiously on a large chalkboard, ran the calculations again. “Yep, see, I carry this two, multiply my total from this column with the square of that remainder and… yeah, there it is, just like always. They’re mathematically locked themselves into last place in the division, somehow.” 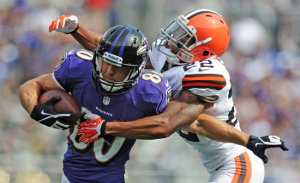 “We’re disappointed to have fallen short of our goals this season,” said Brown head coach Rob Chudzinski. “But just because we’re out of it doesn’t mean we’re not going to play hard the rest of the way. Everyone on this team is a professional, and I know we’ll still be out there giving it our all as we run out the season, even if there’s nothing to play for but pride.”

NFL officials have warned the Browns that they are expected to give good faith effort during their final 14 games, but also informed the team that with one more loss, Cleveland will be officially “on the clock,” and may begin negotiating a contract with South Carolina DE Jadeveon Clowney, the presumptive first pick in next year’s draft.