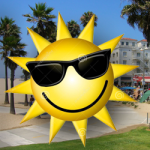 Hi there, Buffalo Bills organization. Heard you’re having a bit of trouble this weekend. Something about “seven feet of snow” around your stadium? Gosh that sounds like a lot. Is that a lot? I wouldn’t know. You see, here in sunny southern California, it NEVER snows, so I have no way of judging these things.

Anyway, I understand that your game this Sunday against the New York Jets has been moved to a neutral field in Detroit. I guess that means you won’t have any sort of home field advantage for this divisional matchup, eh? Wow, that sure is a bummer for you. Hey, speaking of home, that’s just where my hundreds of thousands of NFL fans will be this weekend: at their homes, watching football on their televisions. I mean sure, they’d love to go see a game in person. In fact, they’d probably pay enormous ticket prices and exorbitant parking costs just to do so. But sadly, we don’t have an NFL team in this city for them to spend millions of dollars on, so that’s not really an option.

But apparently, your players are having trouble just getting to Detroit? According to the news, snow drifts are so high in your areas that you’re having to transport players from their home via snowmobile? Gosh, that sounds difficult. I know that here in L.A., we just send stretch limousines to usher our beloved athletes around town in comfort and style. Too bad you don’t have that option. 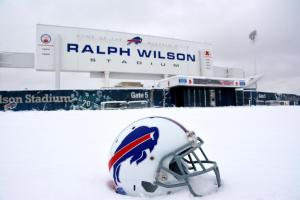 Gosh, what a pair we make, huh? Me with my huge areas of vacant land just begging for a new state-of-the art stadium, and you with your harsh snowy weather that makes outdoor sports impossible during late fall and winter months. If only there was some way that our two needs overlapped in some way, eh?

But I really shouldn’t complain too much. There are so many perks here in the nation’s second largest television market to be thankful for. I have all this balmy sunshine. Plus lots of beautiful beaches. And of course, as the entertainment capital of the world, I have many rich and famous celebrities who would just LOVE to pay top dollar for luxury skyboxes at a brand new football field. Yep, we pretty much have it all out here.

Well, everything except an NFL franchise, that is.

Anyway, I’ve rambled on long enough. Good luck against the Jets this weekend. And enjoy your unexpected visit to Detroit! Don’t worry, I hear that the temperature in Buffalo is going to rise all the way to 48 degrees with scattered thundershowers and driving rain on Monday. So at least that’s an improvement over last week, right? Me, I’ll just be over here on the west coast, with my clear, sunny skies and my temperatures in the mid-to-high 70’s all week long, just wondering if I’ll ever get another NFL team to cheer for. Just like I’ve been doing for every other week over the past twenty years.