DETROIT – After powering the Lions to a 31-30 victory over the Dallas Cowboys by catching 14 passes for 329 yards, Lions WR Calvin Johnson Jr. loudly announced to everyone in the Detroit locker room that, “Calvin Johnson is gettin’ laid tonight, (expletives)!” according to team sources. 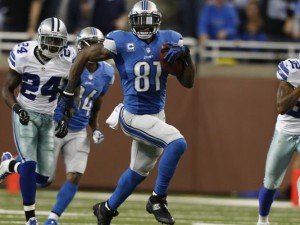 Johnson’s receiving total, just seven yards shy of the all-time NFL record, was a masterful display of precise route running, spectacular moves, and leaping catches, all of which seemed to embolden the normally quiet receiver.

“No more of this humble, soft-spoken bull(expletive) for Calvin Johnson!” Johnson said to reporters at his post-game press conference. “So all y’all better lock up your wives and daughters, (expletive)-holes, ’cause Megatron is gettin’ some Mega-tail TONIGHT!”