TAMPA – In light of the Buccaneers dismal 0-3 start to the 2014 season, including last Thursday’s crushing 56-14 defeat at the hands of the Atlanta Falcons, Raymond James Stadium management today announced that the team’s end zone cannons, traditionally fired whenever the Bucs score a touchdown, will now be used in celebration any time the team’s offensive unit manages to go three straight downs without committing a turnover. 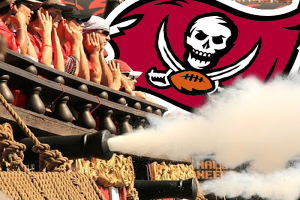 “In a perfect world, we would fire off these bad boys every time our team hits pay dirt in the end zone,” said stadium manager Deborah Reese. “But this isn’t a perfect world, and I hate to think of these glorious cannons only being used once or twice a month. So instead, we’ll be using them to commemorate every drive in which the team successfully executes three straight offensive plays without a fumble or interception. Hopefully, that’ll give the fans in the stands something to cross their fingers and look forward to.”

Asked if she thought firing the extremely large, noisy cannons every single time the Buccaneers go turnover-free for three straight plays might be an annoyance to the spectators, Reese replied, “No, I don’t think hearing that blast two or three times per game will bother our fans at all.”

The move has inspired other teams around the league to adopt similar new practices. Reports out of Jacksonville indicate that the Jaguars will now shower the field with confetti and balloons anytime a running back manages to gain more than four yards on a single carry, while the New England Patriots have announced plans to send a triumphant marching band to midfield while igniting a massive fireworks display anytime a member of the team successfully completes a high-5.