CLEVELAND – Long suffering Browns fans, who have watched their perennially cellar-dwelling team ride a two-game win streak under new QB Brian Hoyer to grab a share of first place in the AFC North, are still struggling to adapt to experiencing a strange, new sensation of whatever the opposite of sadness is, local sources reported today. 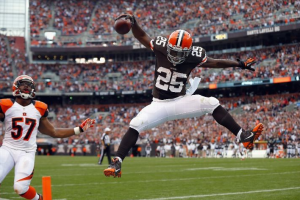 “I don’t know how you’d describe it,” said Johnnie Lee Baker, 46, a Browns season ticket holder for 12 years. “It was… I don’t know, like a weird feeling of shock, but mixed with a kind of sudden endorphin rush? It was totally foreign to me.”

“I’m sure there’s some medical term for it, but I’ll be damned if I know what it is,” added Baker’s neighbor Alex Yoder, 35. “But whatever this emotion is, it caused the ends of mouth to sort of curl upwards. And my lips even parted a little so that my teeth were showing. What kind of strange medical phenomenon could cause such a bizarre physical reflex, I wonder?”

The Browns, who have not won a division crown in the past 24 years, have exceeded early expectations this season despite trading away franchise running back Trent Richardson, and losing starting QB Brandon Weeden to a lingering thumb injury.

“When we traded Trent and elevated Brian Hoyer to the starting QB position, it seemed like our season was already over, and that made me pretty sad,” said Zach Poile, 43, of Cleveland Heights. “But with that sadness came a comforting feeling of familiarity, and routine. Like I was home, you know?”

“But then Hoyer leads us to two straight victories, and now we’re actually tied for first in the division,” added Poile. “So now there’s this… other feeling which is, like, the opposite of that sadness somehow. A feeling that’s kind of warm and inviting and pleasant, all at the same time. I don’t know what you call it, but it’s scaring the shit out of me, man.”