CLEVELAND – In a blockbuster trade executed late Wednesday afternoon, the Cleveland Browns sent second-year RB Trent Richardson to the Indianapolis Colts in exchange for a 2014 first round draft pick, which the team can now use to address its glaring need at the running back position. 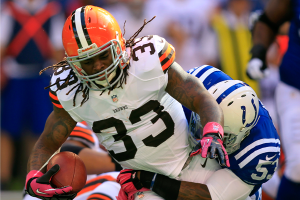 “This trade, if I do say so myself, is a stroke of pure brilliance on our part,” said Browns head coach Rob Chudzinski. “By sending Trent to the Colts, we acquire a first round choice in what should be a very talent rich draft next year. And now we can use that pick to select a quality young RB, which, it just so happens, is a position at which we’re desperately lacking at the moment.”

Added Chudzinski, “It’s uncanny how perfectly this transaction corresponds to our biggest need.”

“We expect the pick we acquired from Indianapolis to be somewhere in the bottom third of the first round, which is perfect for our situation,” continued Chudzinski. “That’s right around where most decent runners are chosen these days. I mean sure, occasionally you might see a back go as high as the top ten, or even the top three, but those are the special, once-in-a-lifetime players. There’s no one like that in next year’s draft. So we feel good about our pick.”