MANHATTAN – Responding to pressure from lawyers for the 29-year old RB, Roger Goodell today announced that embattled Vikings superstar Adrian Peterson will be eligible to rejoin his Minnesota teammates, “beginning the first week of January, just in time for the playoffsmmmpppghhahahaha.” 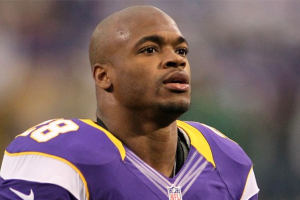 “In light of the horrific child abuse allegations against Adrian Peterson, my initial reaction was to suspend him for the duration of the 2014 season,” said Goodell at a mid-afternoon press conference. “However, after a flurry of protests and threats of legal action from Adrian’s lawyers as well as the NFLPA, I’ve decided to amend my previous decision and allow him to join his teammates for the week prior to their first (snicker)… their first, their first playoff game in January, and he can stay with the team all the way through… (chortle)… through, through the entire postseason right up to and including… heheheh.. including their potential appearance in the… hahaha… in the Super Bowl.”

Added the commissioner while pounding the podium with his fist and convulsing with laughter, “I can’t… oh god, I just can’t say it with a straight face!”

At 4-6, the Vikings appear to have a highly unlikely change to qualify for the playoffs in the ultra-competitive NFC. Goodell insisted however that Peterson was welcome to participate in the postseason if the Vikings defy expectations and advance into the tournament.

“Sure, sure, Adrian can play for them if they… HAHAHA.. if they move past Detroit and Green Bay in the standings to win the NFC North division. Hell, they can even have Ray Rice too. In fact, if the Vikings make it to the playoffs this year, I will personally bust into the Bristol County House of Corrections, break Aaron Hernandez out of captivity, and whisk him straight off to Vikings practice as their new starting tight end. Why not? I think Minnesota can have all the wife-beaters, child abusers, and alleged murderers they want on their quest to win.. hahaha… to win… HAHAHAHAHA….to win an NFL champ….. a championsh… …. OH GOD I CAN’T EVEN SAY IT HAHAHAHAHA.”