CLEVELAND, OH – Second year Browns QB Brandon Weeden has been putting in extra hours at the team’s practice facility recently, working to improve his foot speed in order to better chase down opposing defensive backs as they return his intercepted passes, it was reported early Wednesday. 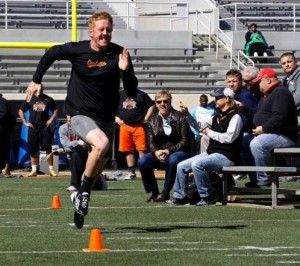 “That’s part of what makes Brandon such a special player,” said Browns coach Rob Chudzinski. “He pays attention to details like that, and works hard to get better ever day. He doesn’t just want to be good at chasing down players who pick off his throws. He wants to be the BEST at it.”

Weeden, who finished fifth in the league last season with seventeen interceptions, has been studying film and working with a track coach to improve his reaction times, take longer strides, and follow better pursuit angles, all in the hopes of limiting opposing cornerbacks to lower return yardage totals.

“I was planning to watch film of Tom Brady and Aaron Rodgers to analyze their post-interception techniques, but as it turns out there isn’t much of a library of them throwing picks,” said Weeden. “So instead, I’ve been focusing on quarterbacks like Romo, Cutler, and Sanchez. Once a ball gets intercepted, those guys are amazing at chasing down a DB and making the tackle.”

Concluded Weeden, “That shows you what years of practice can do for you.”