METROPOLIS – After years of being aggressively recruited, Patriots head coach Bill Belichick has finally accepted a long standing invitation to join the ranks of the “Legion of Doom,” a collection of several of the world’s most vile super villains dedicated to performing evil deeds and hell-bent on world domination, according to a report in today’s Daily Planet. 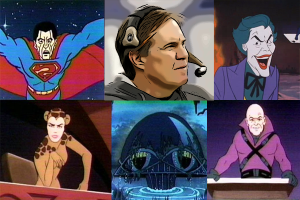 “We couldn’t be more excited to have Bill joining our ranks, hoo hoo hahahaha,” said the Joker, reading from a prepared statement. “For years now, I’ve been a fan of his fiendishly sinister schemes and dastardly misconduct. So when the other guys in the L.O.D. asked me if I knew anyone available to take the opening we currently have, I said, ‘It’s simple. We recruit the Belichick.’”

Added the Clown Prince of Crime, “Hey, you wanna know how I got these scars? Well, long story short, I made a really dumb bet on the Pats-Giants Super Bowl in ’08.”

“Me thrilled at working side-by-side with great Bill Belichick,” said super-antagonist Bizarro. “Me longtime admirer of his expertise at rule breaking and general wickedness. Me greatly looking forward to learning trade secrets from true master of evil.”

Belichick’s tenure in the nefarious organization turned out to be short-lived, however.

“At our first meeting, we asked him what sort of evil ideas he had for us,” said legendary criminal mastermind Lex Luthor. “He started describing this whole elaborate scheme of stealing signals and capturing opposing teams’ playbooks, but somehow the whole thing was contingent on slaughtering a bunch of kittens and dropping a busload of orphans into an active volcano. We were all like, ‘Jesus, dude. That’s really dark. Sorry Bill, We know you just got here, but I think we’re going to have to revoke your membership. We’re evil and all, but it’s clear that we’re not ‘Bill Belichick,’ evil, you know?”