GREEN BAY – After falling behind 42-0 at the end of the second quarter in a game many viewed as a must-win, Chicago Bears head coach Marc Trestman furiously addressed his team at halftime with a speech that consisted of a single, continuous, 15 minute long shout of the word, “fuck,” team sources confirmed today. 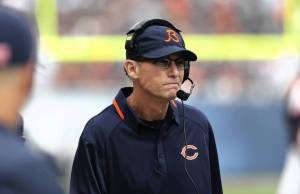 “FUUUUUUUUUUUU…” began Trestman, whose struggling team was outgained 340-162 during the first half. A loss would drop the Bears to last place in the NFC North, and would almost surely end any hopes the team has of reaching the playoffs.

“Man, Coach Trestman really has some pipes,” said Bears QB Jay Cutler. “After about five minutes of him shouting the same word, I left to go pee, grab some Gatorade, and rub one out real quick in the men’s bathroom. When I came back, he was still going strong, and although he was getting kind of blue in the face, he still looked just as mad as ever. It was kind of impressive, actually.”

As the Bears took the field to begin the second half, Trestman addressed NBC Sports sideline reporter Michelle Tafoya with what the field reporter described as a, “full, five and a half minute long sigh.”