SANTA CLARA, CA – As the San Francisco 49ers prepare to play the Denver Broncos Sunday in the first ever game to be played at Levi’s Stadium, the team’s long-awaited new home field, the architect of the $1.3 billion arena suddenly remembered today that he totally forgot to include bathrooms on his design blueprints, according to local sources. 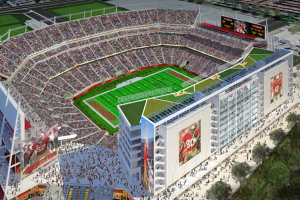 “Oops. That’s my bad,” said a sheepish Brian Boyd, 46, the designer of the stadium located some forty-three miles south of San Francisco. “You have to understand, this was a big project, and the client wanted lots of specific touches. They needed over 70,000 seats, a couple of enormous rooms filled with nothing but big metal lockers, plus they insisted on this really huge empty grass field right smack in the middle of the whole thing. I spent so much time working on these other details, I guess I just forgot about the bathrooms.”

According to reports, 49ers management was annoyed by the oversight, but insisted that Sunday’s inaugural game would go on as planned.

“We’re adapting as best we can to these unfortunate circumstances,” said team G.M. Trent Baalke. “In place of urinals, we’ll have a few hundred empty soda bottles for our fans to use. Instead of toilets, we’ll have a couple dozen plastic buckets. And in place of toilet paper, we’re going to have lots of Seattle Seahawks T-shirts, jerseys, and hats. I think our fans will be happy to make do with these substitutions.”