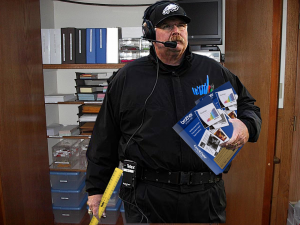 “Check out all this stuff I got,” said Reid, who had been the longest tenured NFL head coach before his dismissal. “I grabbed like five Post-Itâ ¢ pads, and two boxes of paper clips. Plus I got a couple packets of printer paper, a brand new ruler, a three-hole punch, and two boxes of pens. Sweet!”

While many expect him to secure new employment quickly, possibly in San Diego or Cleveland, Reid claimed that he prefers to be ready for any possibility.

“Sure, I’d love to end up with some different team, and a nice new head coach’s salary. But if it doesn’t work out that way, you won’t have to worry about old Andy. I’m not going to need to buy paper clips for years!”