“Well New York, here we are again!” said Jets coach Bill Belichick Thursday at the conclusion of his team’s Super Bowl victory parade down 7th Avenue in midtown Manhattan. “You getting sick of seeing us do this yet?” he smiled to raucous cheers. 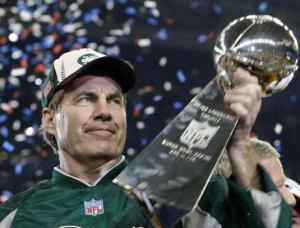 The normally stoic Belichick was in understandably high spirits, as he and his team celebrated their fifth NFL championship in the past thirteen seasons. Standing next to Super Bowl MVP Tom Brady, Belichick raised his fist to show the crowd the five Super Bowl rings adorning his hands, and exclaimed, “Looks like I’m all outta fingers. Good thing I’ve got another hand for next year!”

While the rest of the NFL may have grown weary of the Jets’ dominance over the past decade and a half, history will show that Belichick once very nearly walked away from the team with which he has become synonymous.

“Yeah, back in 2000 when (Jets owner) Woody Johnson first hired me, I nearly resigned after just one day,” Belichick recalled recently. “I wrote the resignation out on a napkin, if you can believe that. Truth is, I had an offer to go and coach another team, who I’d rather not name, and they almost tempted me away from New York. Thankfully, I came to my senses and tossed that napkin in the trash. The rest, as they say, is history.”

Under Belichick, the Jets quickly rose to become an NFL powerhouse, thanks in large part to the franchise’s decision to draft Tom Brady in the fifth round of the 2000 draft. 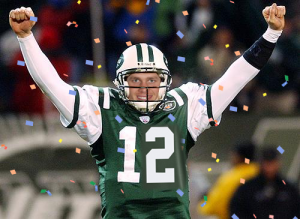 “I have to give Belichick credit for that one,” said former Jets coach and GM Bill Parcells. “That year, I wanted to draft (Marshall QB) Chad Pennington with one of our first round picks. But Bill talked me out of it, and persuaded me to select Shaun Alexander instead, and boy, that 1-2 punch he gave us with Curtis Martin worked out pretty well. Then, round five comes along, and Bill insists that we draft some skinny QB out of Michigan named Tom Brady. This kid wasn’t even on my radar, but Belichick had heard he might possibly get picked by someone else in the 6th, so we took a flier on him one round earlier.”

During the early part of the 2000′s, Brady helped turn Jets receivers Wayne Chrebet and Dedric Ward into household names. But wanting to add a deep threat to the team’s arsenal, Belichick famously traded for Cowboys WR Terrell Owens in 2007.

“A lot of people thought we were crazy to trade for Owens,” Belichick remembers. “But during his time here in New York, he was a model citizen and set a bunch of records for us. It was unfortunate that we had to trade him away in 2010, but he had started to revert back to some of his former bad habits, and we simply couldn’t have that.”

2007 also saw the infamous “Spygate” scandal, in which Patriots head coach Eric Mangini accused Belichick of illegally videotaping opposing sidelines during games as a means of deciphering signals for later use. NFL commissioner Roger Goodell fined Belichick and the Jets, and stripped the team of its first round choice in the upcoming draft (while curiously destroying all evidence without releasing it to the media).

Reporters attempted to persuade Belichick to comment on the matter when the teams met for a rematch later in the season, but the tight-lipped coach refused to take the bait, muttering simply, “I’m not going to talk about that. We’re just focusing on the Patriots this week.”

Belichick of course would have the last laugh when his Jets defeated the New York Giants in the famed “Subway Super Bowl” of 2008. One of the tightest championship contests in years came down to a final drive for the Giants, but Chad Pennington (who the Giants drafted after he was passed over by the Jets) threw the ill-fated pass that bounced off David Tyree’s helmet and into the hands of Jets S Rodney Harrison to preserve the victory.

Now, as the franchise hangs yet another championship banner from the roof of MetLife Stadium, the Jets enter the offseason as clear-cut favorites to win it all again in 2013.

“I don’t see who’s going to stop them,” said Sports Illustrated’s Peter King. “The Bills are a shambles, the Dolphins are stuck in neutral, and while Norv Turner’s Patriots might have some talent on the roster, as long as Pats QB Mark Sanchez keeps throwing those butt-ceptions of his, New England certainly won’t be a threat.”