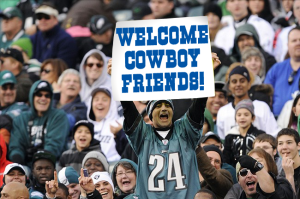 “Gosh, it sure is true what they say: the Philadelphia Eagles have the nicest fans in the entire NFL by far,” said Davenport, while drinking a beer purchased for him by one of his many new friends in section 137, row 14. “Everyone I met at the game was just so kind and welcoming to me. They even gave me high-fives when Tony Romo threw that TD to Terrance Williams in the fourth quarter. Man, what a bunch of sweethearts.” 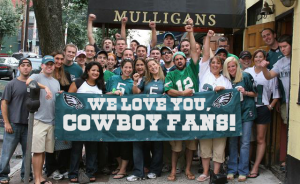 “That’s just the Philly way,” said Eagles fan Paulie Lockhart, 26. “Whether it’s Rangers fans coming to a Flyers game, Boston fans here to see the Celtics take on the Sixers, or Pirates supporters catching a Phillies series, we want visiting fans to feel right at home here in our wonderful city. That’s why every sports fan in this town takes pride in being such a gracious host to anyone who cheers for an opposing team.”

Eagles fans have long been known as the classiest, most warm-hearted supporters in the NFL. Some of the oft-repeated anecdotes about Philly backers include the time when they showered Santa Claus with long stemmed roses, and of course, the famous moment in 1999 when the entire stadium chanted “Get well soon, Playmaker!” to an injured Michael Irvin as he lay motionless on the Veterans Stadium turf.

According to Davenport, last Sunday’s game was completely in line with Eagles fans’ reputation for hospitality. 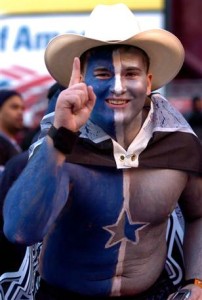 “I showed up to ‘the Linc’ wearing full Cowboys gear, as well as blue and silver paint all over my face and body,” said Davenport. “Well, as soon as I walked to my seat, Eagles fans around me began saying, ‘Hey look everyone, it’s a Dallas fan! Howdy, pardner!’ And before I knew it, a bunch of folks wearing Brian Dawkins jerseys were shaking my hand, patting me on the back, and telling me how much they respected and admired the Cowboys franchise. I felt like a tiny blue speck in a sea of green love.”

“Heck, I was even teasing them a little bit about our two teams’ history,” continued Davenport. “You know, just reminding them how my Cowboys have five Super Bowl championships, while their Eagles don’t have any. They took it all in stride, and we had a good laugh.”

Davenport claimed to have thoroughly enjoyed his experience, and said he would encourage all rival sports fans to consider making a road trip to Philadelphia for a game.

“Oh definitely. It doesn’t matter if you root for the Cowboys, Giants, or Redskins. You should make it a point to come to Philly and enjoy rooting for your team as they play against the Eagles. And be sure to wear as much swag as you can to show everyone that you’re cheering for the opposition. Trust me, they love it, and will treat you as if you’re family. In fact, if you’re not careful, they just might kill you with kindness!” 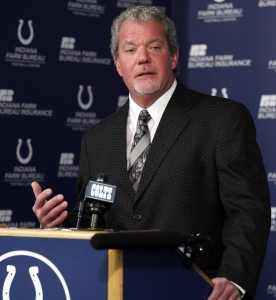 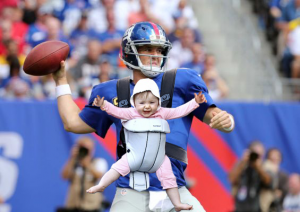