Let’s talk about contracts for a second. Do you know what I’m scheduled to make this year? $9.25 million. That sounds pretty good right? 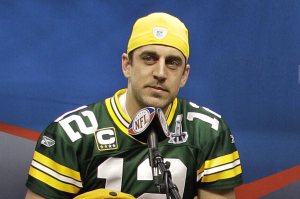 EVERY ONE of those dipshits makes more than me per season despite the fact that not a single man among them can measure up to my magnificent level of talent. That’s why I have a message for the Green Bay Packers: Start paying me like Tony Romo, or else I’m gonna start playing like Tony Romo.

That’s right, Packers brass. You want to see me start throwing interceptions late in a game when we’re trying to protect a lead? Or how about a fumble on a crucial third and long? Maybe you’d like it if I bungled some basic clock management on a potential game-winning drive? Hell, I could even take over as the holder for field goals, and let a snap slip right through my fingers on what could have been a playoff-clinching field goal. Do you want to watch me do any of those Tony Romo things? You don’t? Well then you better crack open the vault, because either I get Tony Romo cash, or you get Tony Romo play. The choice is yours.

Romo signed a $108 million deal with the Cowboys earlier this year, and he’s won a total of one playoff game in his mistake-filled life. Peyton Manning? His contract is worth $96 million, and that old bastard hasn’t won a playoff game in three frigging years. Joe Flacco? Joe Flacco signed a $120 million dollar contract despite the fact that he’s Joe Flacco. How in HELL can any of those yutzes make more cheddar than me?

Look, we can all agree that I’m the NFL’s best QB, right? On this fact there should be no debate. I’m a three-time Pro-Bowler, a Super Bowl champion, and I have an NFL MVP trophy sitting on my shelf. You’d think a resume like that would cause Packers GM Ted Thompson to shower me with more riches than any other athlete in human history. But no, Old Man Thompson thinks he can get away with paying me at a bargain basement level. Well guess what Teddy? Your Discount Double Days are over bitch, because it’s time for the Mighty Aaron Rodgers to get PAID.