“As a rookie here in our system, Aaron has struggled with his protection. In the sense that he hasn’t been paying it to us like we told him to,” added fellow Diablo Sergio Vasquez. “So we’re planning on moving him to a new position.”

When asked to clarify the position to which Hernandez would be moving, Vasquez pointed to a shadowy area of the prison yard and said, “over there, beneath that pile of concrete beams and cinder blocks.”

According to prison sources, Hernandez will remain on the day-to-day list for the time being, but the two Diablos agreed that status could change in the very near future.

“Well, I would label him as ‘highly doubtful’ to be available on Sunday,” said Delgado. “Not for any particular game or anything. Just, you know, in general.”

“There’s always the possibility that he might get ‘gang tackled’ at some point, and he could be facing the possibility of ‘sudden death,’” added Vazquez. “At that point, we would declare him officially ‘out.’”

The convict paused, then added, “we’re planning on murdering him, is what we’re trying to say.” 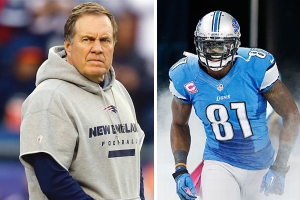 Peyton Manning: “Victories Are Nice, But Individual Records Are The Real Reason I Play This Game.”