San Francisco 49ers management announced on Friday the team’s intention to sign free agent WR Terrell Owens to a ceremonial one-day contract. But upon seeing the terms of the deal, Owens complained that he felt “disrespected,” by 49ers management, and then proceeded to criticize and insult quarterback Alex Smith and head coach Jim Harbaugh, before declaring his plans to hold out for a restructured deal. 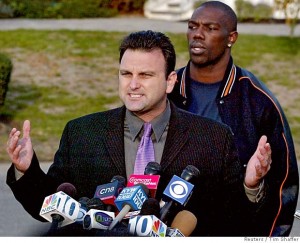 “My client and I both feel that this so-called ‘contract’ is a slap in the face to a player of T.O.’s stature,” Owens’ agent Drew Rosenhaus said, while waving a copy of the traditional one day, one dollar offer sheet. ”We will not agree to any deal that does not include, at the minimum, a fully guaranteed two-figure salary, along with an extended three day term, and an option for a weekend pickup.”

When questioned by reporters as to the unorthodox nature of holding out on a one day contract, Rosenhaus simply replied, “Next Question.”

In addition to his dissatisfaction with the terms of the deal, Owens voiced displeasure with San Francisco’s starting signal caller.

“(Alex) Smith isn’t a quarterback worthy of throwing to a Hall of Fame caliber receiver like myself,” Owens told a media gathering while performing pushups on the sidewalk in front of his one bedroom studio apartment in Van Nuys, CA. ”He’s inaccurate, he lacks arm stregth, and I heard someone say once that he might be gay. I can’t say for sure. I’ve never met him.”

Coach Jim Harbaugh expressed frustration over the drama created by the T.O. situation. ”Look, I just want to have a productive training camp. So all I can do is coach the guys who are here. I can’t worry about the players who aren’t here, to say nothing of the players that left here, what, nine years ago?”

“He would say something like that,” Owens stated after being informed of Harbaugh’s remarks. ”He’s not man enough to speak to my face. Do you know that (Harbaugh) and I haven’t spoken, ever? How pathetic is that? A coach going an entire lifetime without ever once speaking to a superstar receiver, albeit one not actually on the team.”

The 49er locker room seemed torn on the issue, with numerous players rushing to defend Smith and Harbaugh, while many others took up Owens’ side.

“This T.O. thing is tearing us apart,” claimed linebacker Patrick Willis. ”A few days ago, we were having a great camp, we felt good about the coming year. We were a family, man. Now it just seems like we’re all at each other’s throats. This distraction might have ruined our season before it’s even begun.”

Owens, however, denied that his actions have in any way negatively impacted the team.

“There you media guys go again,” he said, shaking his head. ”Always blaming T.O. for everything. Making me out to be some kind of cancer, when all I want is to be a great teammate and play for a great team. And by ‘great team,’ I mean one that will focus all of its attention around me, and indulge any and all of my whims. And then you guys go and make it look like I’m the bad guy. Man, y’all are pathetic.”